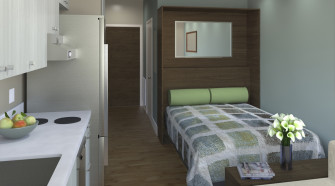 In recent years, officials in many of the nation’s most expensive housing markets have embraced “micro-apartments” as a way to provide less-expensive housing for young renters.  They are betting that the tiny apartments — generally the size of a hotel room for about half the rent of a full-size apartment — will attract young professionals and recent college graduates, helping to revitalize city centers.  Micro-apartments are about 300 square feet or smaller, though some developers and cities define them as large as 500 square feet. They sometimes lack a separate kitchen or bedroom. Developers believe that single people in their 20s and 30s will accept less space in exchange for lower rent, even in cities where rent levels aren’t especially lofty. Nationwide, rents have soared as the supply of apartments hasn’t kept pace with demand.

Micro-apartments started gaining popularity decades ago in large cities coping with rising rents, including New York, Seattle and Washington, D.C. The complexes often have communal spaces such as large lobbies and restaurants where tenants can socialize. Developers reason that many young tenants would prefer communal space to personal space and would rather spend money socializing than on rent.  A national tally of micro-apartments couldn’t be found. But real estate data provider CoStar Group Inc. counts 26 micro-apartment projects totaling 2,000 units built or under development since 2011 in six of the nation’s most expensive markets: San Francisco, Washington, Los Angeles, Boston, New York and Seattle.

Some real estate executives aren’t sure that micro-apartments would work in smaller or less-expensive cities because rents aren’t sufficiently high to induce enough renters to give up space.  In smaller markets,  if you have a good job, you can typically afford the rent of a full-size apartment.    Another potential problem for smaller cities is that they don’t always have the mass transit, night life and cultural facilities to lure younger workers to live downtown.  You can’t just drop these micro-apartments  in communities that don’t have the amenities to serve that kind of lifestyle.

Studies show  that some renters are commuters using the units as second homes.  They’re people who have a 45-minute to one-hour commute to work and want to have a place downtown.  It’s people looking for party crash pads. The rents are pretty reasonable, so it’s an attractive alternative to staying in a hotel.  Some have homes in the suburbs and want a place downtown,  close to the office and find these micro units a viable option for nights when they burn the midnight oil.