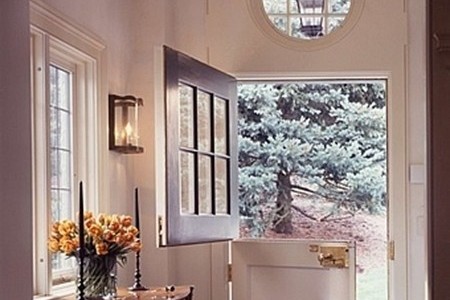 10 Features of Old Homes Worth Saving 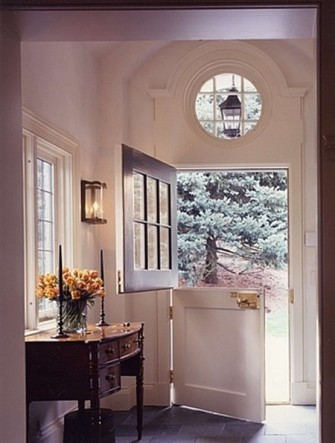 Older homes are a dime a dozen.  We see them all over our area.  Many yearn to tear them down and build a new “oldie but goodie”.  These builders want features of older homes, but updated.  If you are one of the lucky few who have one of these older “hot” items, like a dumbwaiter, or a laundry chute, save them! These prized home features of yore, should not be thrown away with the bathwater.  Check out these 10 features of older homes that are worth saving:

Popular with the 18th-century Dutch settlers of New York and New Jersey, so-called Dutch Doors are split horizontally in the middle; open just the top to keep out animals while letting in light and air.  Making your own is straightforward. Saw any wood door in half, then attach each half to the door frame with two hinges apiece. A simple sliding bolt joins the top and bottom as a single, solid panel.

Sleeping porches became popular in the 20th century, when they were advocated by health professionals who believed that the fresh air they provided bolstered immune systems. Such porches were already popular in the South and West, where sleeping outdoors was cooler and more comfortable.

Transom windows are those panels of glass you see above doors in old homes, especially those built in the Mission or Arts and Crafts styles. They admitted natural light to front hallways and interior rooms before the advent of electricity, and circulated air even when doors were closed for privacy. Transoms serve both purposes just as well today, and of course, the beauty of glass is timeless.

If your bedroom is two floors up from the washer and dryer, you might want to resurrect another nearly forgotten feature of old homes: the laundry chute.

If you’d like to construct your own, to ensure that your clothes are funneled smoothly, weld sheet metal together to create a ramp, or use lengths of extra-large PVC pipe to form a tube that ends in your  laundry room. No 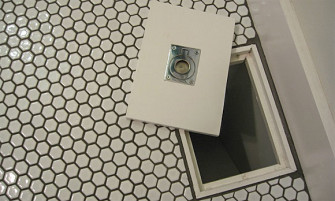 matter your approach, adding a laundry chute injects low-tech convenience into one of life’s never-ending chores.

When horse-drawn wagons were a common mode of transportation, a boot scraper at the front door was a real necessity. As paved roads replaced dirt and tires replaced hooves, the boot scraper fell out of use.  Today, you can still find the traditional-style cast iron bars set into masonry on many a front stoop, although many modern wood, rubber, or plastic scrapers have been augmented with brushes to remove debris from all angles.

Intercom systems may remind you of “The Brady Bunch,” but these 1970s-era devices can be useful even if you don’t have six kids, a dog and an Alice. Systems consist of a base station and several remote modules, and the newest intrecoms are capable of piping music throughout your home. If you’d prefer to avoid any hardwiring, opt instead for a phone system with built-in intercom functionality.

Northeast homes of the 18th and 19th century had walls of exceptional thickness (as they were often made of brick), providing a deep window jamb whose embrasures, or pockets, could contain an entire interior shutter. It’s high time these clever architectural details made a comeback, because interior shutters provide not only privacy, but also insulation or shade when the elements really start to bear down. 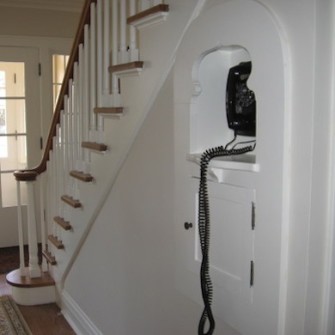 Back when telephones were large and unwieldy, homes often had a special nook to accommodate the bulky devices. Although the size of these cumbersome antiques is what necessitated their having their own hole in the wall, designating a dedicated space for a telephone doesn’t seem like such a bad idea, even today. After all, most of us spend the last five minutes before leaving the house screaming, “Where’s my cellphone?!” 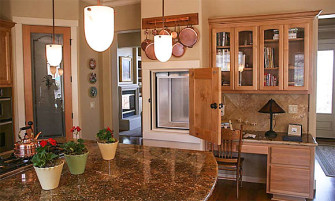 Convenient for carrying items like laundry and food from floor to floor, these small freight elevators rose to popularity during the 19th century. Although today they are seen mostly in restaurants and schools, a dumbwaiter could be installed in many multilevel homes and enhanced with electric motors, automatic control systems, and greater customization than was possible in olden times.

The mail slot has enjoyed a long run as a front door staple, and the image of the friendly neighborhood mail carrier sliding letters through the slot still persists to this day. However, with the rise of online bill payment and the decline of the U.S. Postal Service, mail slots — so sleek and secure — are no longer ubiquitous. Add some pizzazz and utility to your front door by installing one!