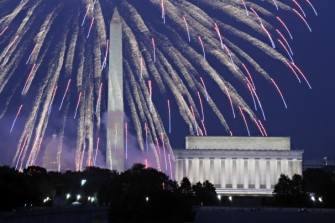 Washington DC is a spectacular place to celebrate July 4th!  The National Mall with Washington DC’s monuments and the U. S. Capitol in the background, forms a beautiful and patriotic backdrop to America’s Independence Day celebrations. This is an all-day event in the nation’s capital, beginning with a parade along Constitution Avenue and ending with a spectacular display of fireworks over the Washington Monument. Following is a guide to all of the 4th of July events on the National Mall. The 4th of July celebrations in Washington, DC are among the most attended events of the year and many people arrive early to stake out a seat on the lawn. There are plenty of activities scheduled throughout the day to keep the whole family busy.

Getting to the Mall

The best way to get to the National Mall is to take the Metro. Stations nearby include Smithsonian, Metro Center, Gallery Place-Chinatown, Judiciary Square, Federal Triangle and L’Enfant Plaza.The Smithsonian Metro station will be open all day!Please note that due to construction this year, the grass panels on the Mall between 3rd and 7th Streets are closed to the public. It typically takes 1 ½ to 2 hours to clear the Mall after the fireworks.

The annual event includes daily and evening music and dance performances, crafts and cooking demonstrations, storytelling and discussions of cultural issues. The themes of the 2012 program will be: Campus and Community, Citified: Arts and Creativity East of the Anacostia River and Creativity and Crisis: Unfolding The AIDS Memorial Quilt. The hours on the 4th of July are 11 a.m to 5 p.m.

4th of July at the National Archives

Concert on the Monument Grounds

The traditional concert will not be held this year due to budget cuts. However, Navy Bands are attempting to schedule performances at other venues on the Mall. The TENTATIVE plans are as follows:

A 4th of July tradition in the nation’s capital includes a live concert by the National Symphony Orchestra and several pop artists performing patriotic music on the West Lawn of the U.S. Capitol Building. The concert and show is followed by a spectacular display of fireworks over the Washington Monument. The concert is free and open to the public. No tickets are necessary. The annual event will be broadcast live on WETA TV 26 with a repeat airing at 10:00 p.m.

Fireworks on the National Mall

Fireworks Time: At dark, usually around 9:15 p.m. Rain Date: July 5th
Launch Location: The fireworks are launched from the Lincoln Memorial Reflecting Pool and light up the sky over the Washington Monument.