Written by Moira E. McLaughlin of the Washington Post: 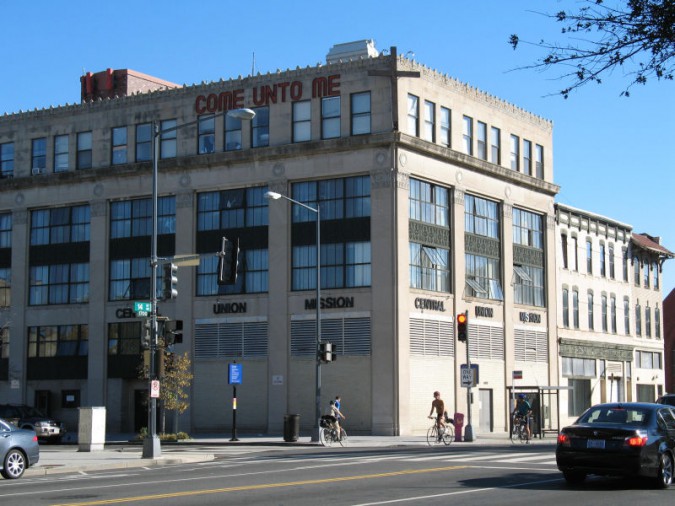 The red sign that reads “Come Unto Me” over the Central Union Mission on 14th and R streets NW is meant for the homeless men whom the shelter has been serving since 1983. But these days it seems to be calling out to urban hipsters, too.

Central Union Mission, a shelter for homeless men at 14th and R streets NW, will relocate late this summer to 65 Massachusetts Ave. NW. New condos and retail will be going in its place. (Moira E. McLaughlin – The Washington Post)Central Union Mission sits smack in the middle of the 14th Street revitalization that began in full force about five years ago. Today the mission is mere steps from fine coffee, microbrews and dining, and is another perfect spot for small condos with big price tags. For years, Central Union Mission has been trying to move to a new space but until recently had met with various difficulties.

This spring, construction is slated to begin on the mission, converting the four buildings which now house 140 homeless men a night into boutique condos and retail space. Eric Colbert is the architect. He is involved with other projects on 14th Street, including the Northern Exchange condos across the street from the mission, which are nearing completion, and the massive, new condo/retail project Louis at 14th and U streets, just northwest of the mission.

Central Union Mission will move to 65 Massachusetts Ave. NW in the city-owned Gales School, which is being renovated. Officials plan to move the mission into Gales late this summer. In the meantime, they plan to relocate the shelter to temporary quarters when construction begins at 14th and R.

“Our new facility is located just a few blocks from Union Station and the bus station,” said the mission’s executive director David Treadwell, in an e-mail. “This location will also allow us to reach poor and needy people who have been pushed out of the [Northwest] corridor, but still have great need for the services offered by Central Union Mission.”

An architectural rendering of the new condo and retail space at 14th and R streets NW. (Val Boudreaux – Eric Colbert & Associates)The new space at 14th and R will include about 50 units, about 800 to 1,000 square feet each, mostly one- and two-bedroom condos with a couple of studio apartments as well. There will be no underground parking. Colbert said he expects the project to take about 14 months to complete. The new structure will incorporate the four buildings already there to create what Colbert calls “boutique” condos. That means that for the most part, the condos will not be uniform in design. Colbert is working with about 30 different floor plans for the units in the development.

“The existing structures are a blessing in the sense that they add a lot of character,” Colbert says. Character might mean exposed brick or small, unusual spaces that require a little decorative imagination. “Old buildings make you do things you may not do elsewhere [such as] create little nooks,” Colbert says. Nooks that might be perfect for a baby grand piano or an oversized plant.

The new owner of the mission buildings, Jeffrey Schonberger of Alturas Real Estate Interests, said condo prices will be on par with those of Northern Exchange, ranging from $419,900 to $849,900. The bottom floors will include space for four retail businesses. Colbert says he plans to “re-create the old storefronts that were there originally” and “really celebrate the historical components of the designs.”

Schonberger says he will be very picky about the retail that goes in the spaces. “We want to make sure they are good neighbors to the residents,” he said. “All of our retailers are of a certain ilk and they’re all local. We like dealing with local tenants . . . high-end without question. We’re looking at a lot of different retailers, [and] we have a tremendous amount of interest at this point.”

Schonberger is still thinking about what to name the new complex but is considering calling it “The Mission,” after the shelter it is replacing.