3 Ways Young Adults Can Pave the Path to Homeownership 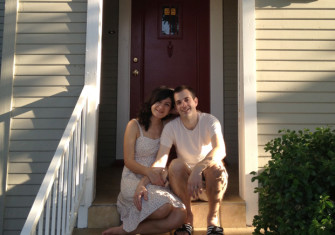 Pity the poor millennial. Saddled with out-of-this-world student-loan debt, above average unemployment and helicopter parents micromanaging their every move, people younger than 35 can find it hard to make their own path in the world. And buy a house? Forget about it. Despite historically low interest rates and a glut of cut-rate houses on the market, many millennials are hitting a brick wall when it comes to getting the mortgages they need. So instead, young adults are finding creative ways to leverage the post-Recession economy to get into the home they want.

While the Great Recession boxed some people out of the housing market,  for example, Dave and Stephanie Morgan, both 29, were among the millennials who used the grim market conditions to their advantage when they bought their house in 2009.  According to the Morgans, under normal market conditions, their student-loan debt would have made it impossible to obtain a mortgage for the house they wanted. Fortunately, the Michigan couple live in one of the states hardest hit by the recession. “Fortunately,” because in April 2009, Michigan was one of 10 states that together accounted for more than 75 percent of foreclosure activity nationwide, and short sales made up 16 percent of the country’s housing market. That meant there were plenty of houses available that fit the Morgans’ modest price range.  To sweeten the deal, the Morgans were able to take advantage of an $8,000 first-time-homebuyer​ tax credit being offered at the time. They settled on a home in Lowell, Mich., that was being offered for a short sale and were able to secure a rural-redevelopment loan that meant they could close with zero out of pocket. The Morgans knew the market was low and wanted to maximize their tax credit, while they liked the home and the area where they purchased.

Another Michigan millennial, Robert Bettig who used the poor housing market to his advantage. At age 32, Bettig wanted the opportunity to build equity by buying a house, but unlike the Morgans, even a mortgage for a short sale or foreclosure was out of reach. With 90 percent of his debt tied to student loans and no jobs on the market matching his educational skills, Bettig turned to a land contract to buy his house last year. While laws regarding land contracts can vary from state to state, in Bettig’s case, he signed a contract that essentially amounts to a “rent-to-own” agreement with the home owner. Rather than making monthly principal and interest payments to a mortgage company, he makes payments directly to the homeowner based upon an amortization schedule. At the end of the contract period, the title will be transferred to his name.  It was also a win-win situation for the homeowner — a widow who had been trying unsuccessfully to sell her house for more than 18 months. Despite numerous price drops, the house simply couldn’t compete with neighboring foreclosures that were practically being given away. While Bettig is paying nearly double the interest rate offered for conventional mortgages, he hopes to eventually be able to qualify for a mortgage and pay off the land contract early. For now, he feels fortunate to have found a house he likes and that he is able to afford.

Mom and Dad are the Lenders

When all else fails, some millennials are turning to their parents. According to figures released in November 2012 by the National Association of Realtors, nearly a quarter of all first-time homebuyers had help from a relative in making their down payment.  However, in some cases, parents are going beyond simply co-signing a loan or helping with a down payment. Sometimes, they actually buy a house outright and then either give it or rent it out to their children. At the end of 2011, a Real Estate survey found one in five baby boomers were helping their children obtain homes by either gifting one, co-signing on a loan or helping with a down payment. Certainly, homeownership for millennials is on the decline. The Census Bureau reported only 36 percent of those younger than age 35 owned homes at the end of 2012, down from more than 43 percent in 2004. However, for creative millennials squeezed out of conventional mortgages, there are still plenty of ways to get out of a rental or the family nest and into their own house.