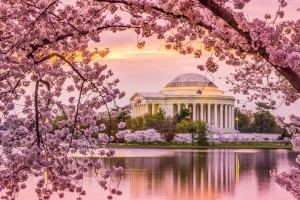 March 20 – April 17, 2016. See the blossoming of thousands of cherry trees on the Tidal Basin in Washington, DC. The capital welcomes spring with this annual tradition begun by the gift of 600 trees to the United States from Japan in 1912. Don’t miss the parade, kite festival, concerts, fireworks and cultural events.

March 27, 2016. See a guide to celebrating the holiday in the nation’s capital including the schedules and suggested venues for Easter brunch, Easter egg hunts, religious services and other special events.

Through March 26, 2016. See documentary, feature, animated, archival, experimental and children’s films from around the world at a variety of venues around Washington, DC.

March 20-27, 2016. The festival will screen five recent Japanese films, each in a different genre, that showcase the diversity and richness of Japanese film making today.