Celebrate the 4th of July in the Washington, D.C. Metro Area 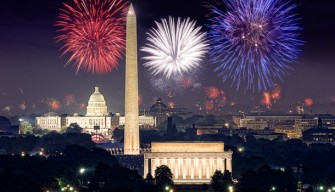 Washington, D.C. might just be one of the best places to celebrate in the country! The 4th of July celebrations in Washington, DC are among the most attended events of the year and many people arrive early to stake out a seat on the lawn. There are plenty of activities scheduled throughout the day to keep the whole family busy.

1) For the quintessential Fourth of July experience, don’t miss America’s National Independence Day Parade, which features marching bands from all over the country, military and specialty units, patriotic floats and VIPs. It’s a great start to a full day of Fourth of July events. The parade kicks off at 11:45 a.m. on Constitution Avenue and 7th Street NW.

2) The Fourth of July festivities continue on the U.S. Capitol’s West Lawn with “A Capitol Fourth,” a free, 90-minute musical extravaganza. The concert features the National Symphony Orchestra and is capped off with a rousing rendition of Tchaikovsky’s “1812 Overture” complete with live cannon fire provided by the United States Army Presidential Salute Battery. Gates open at 3 p.m., and the concert begins at 8 p.m.

3) A Capitol Fourth is also the soundtrack for DC’s fireworks spectacular on the National Mall. The Mall fills up quickly, so pack a picnic and make a day of it. The fireworks show typically starts shortly after 9 p.m.  Looking for a unique view of the fireworks? Try a boat cruise or book a reservation at a hotel with a rooftop view.

4) In addition to “A Capitol Fourth” concert, patriotic music abounds during Fourth of July week. On Independence Day, catch the free Annual Independence Day Organ Concert at the Washington National Cathedral at 11 a.m. The U.S. Navy Band performs a series of free concerts throughout the summer, including Fourth of July week, as does the National Gallery of Art’s Jazz in the Garden series.

5) There’s plenty to do on the National Mall before the evening festivities. Add a splash of international culture to your all-American holiday and make your way to the National Mall for the Smithsonian Folklife Festival, which typically runs over two long weekends around the Fourth of July. The annual celebration of cultural diversity turns the National Mall into a global bazaar with music, dancing, crafts and demonstrations exploring different cultures.

6) The National Archives, home of the original Declaration of Independence, holds great Fourth of July festivities that are fun for the whole family. The celebration kicks off at 10 a.m. with a ceremony, including a presentation of colors, patriotic performances and a dramatic reading of the Declaration of Independence. From 11 a.m. to 2:00 p.m., additional family-friendly activities are scheduled, including appearances by Thomas Jefferson, Benjamin Franklin and other historical figures.

7) If you want to take in the museums, try the National Museum of American History‘s ongoing “American Stories” exhibit, featuring a number of quintessential American artifacts like Dorothy’s ruby-red slippers, Kermit the Frog and part of Plymouth Rock. A number of museums and attractions also are taking part in Civil War to Civil Rights, a citywide commemoration of the 150th anniversary of the Civil War that examines DC’s role in both important eras.

8) If you’re looking to cool down, head over to Tudor Place on July 2 for their annual Independence Day Ice Cream Social. The historic Tudor Place estate was built by Martha Washington’s granddaughter and her husband, so it’s a fitting place to spend Independence Day. The ice cream social includes a tour of the house, a make-your-own-sundae bar in the garden and plenty of family-friendly games and crafts. Plus, all participants will receive a special copy of a rare, personal letter from Washington belonging to the Tudor Place archives. One of just three such notes in existence, it is an affectionate note to his wife as he took up command of the Continental Army.

9) The Willard InterContinental Hotel, just steps from the White House, decks out its lobby and opens its doors for its annual Fourth of July block party. The Willard’s acclaimed restaurant, Café du Parc, offers up American barbecue classics and a crepe station, all set to a soundtrack of American tunes from a live rock band.

10) There’s nothing as American as baseball, except maybe apple pie. Washington’s home team, the Nationals, can add some American spirit to your Fourth of July week. Catch a game and snack on some local fare, like a chili dog or half-smoke from Ben’s Chili Bowl.

12) Celebrate America this Independence Day with one of the largest fireworks displays in Northern Virginia! It’s another all-American beach party in Old Town Manassas, sponsored by the City of Manassas! Starts at 4PM in the streets surrounding the Old Town train depot, the Harris Pavilion and the Manassas Museum. There will be great rides for the kids starting at 3 PM, food concessions and a red, white, and blue hayride!  firework display at 9:15PM!