Mistletoe is a plant that grows on willow and apple trees (and in garden centres!). The tradition of hanging it in the house goes back to the times of the ancient Druids. It is supposed to possess mystical powers which bring good luck to the household and wards off evil spirits. It was also used as a sign of love and friendship in Norse mythology and that’s where the custom of kissing under Mistletoe comes from.

The name mistletoe comes from two Anglo Saxon words ‘Mistel’ (which means dung) and ‘tan’ (which means) twig or stick! So you could translate Mistletoe as ‘poo on a stick’!!! Not exactly romantic is it!

Christmas (or Plum) Pudding is the traditional end to the British Christmas dinner. But what we think of as Christmas Pudding, is not what it was originally like!

Christmas pudding originated as a 14th century porridge called ‘frumenty’ that was made of beef and mutton with raisins, currants, prunes, wines and spices. This would often be more like soup and was eaten as a fasting meal in preparation for the Christmas festivities. 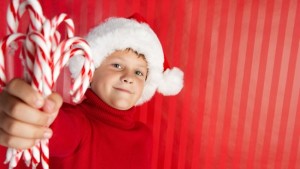 The Christmas Candy Cane originated in Germany about 250 years ago. They started as straight white sugar sticks.

A story says that a choirmaster, in 1670, was worried about the children sitting quietly all through the long Christmas nativity service. So he gave them something to eat to keep them quiet! As he wanted to remind them of Christmas, he made them into a ‘J’ shape like a shepherds crook, to remind them of the shepherds that visited the baby Jesus at the first christmas. However, the earliest records of ‘candy canes’ comes from over 200 years later, so the story, although rather nice, probably isn’t true!

The custom of burning the Yule Log goes back to, and before, medieval times. It was originally a Nordic tradition. Yule is the name of the old Winter Solstice festivals in Scandinavia and other parts of northern Europe, such as Germany.

The Yule Log was originally an entire tree, that was carefully chosen and brought into the house with great ceremony. The largest end of the log would be placed into the fire hearth while the rest of the tree stuck out into the room! The log would be lit from the remains of the previous year’s log which had been carefully stored away and slowly fed into the fire through the Twelve Days of Christmas. It was considered important that the re-lighting process was carried out by someone with clean hands. Nowadays, of course, most people have central heating so it is very difficult to burn a tree!

The tradition of the Christmas Pickle has got to be one of the strangest modern Christmas customs in that no one is quite sure why it exists at all!

In the 1880s Woolworth stores started selling glass ornaments imported from Germany and some were in the shape of various fruit and vegetables. It seems that pickles must have been among the selection!